Yes
Scout is a brown tabby cat with light blue eyes. They are a marriageable cat from The Forest Colony.

Scout is a positive and easygoing cat. They are an avid hunter who is dedicated to protecting their colony's borders.

Scout’s den is by the west town entrance. A catfish, mouse, and squirrel are laid outside, with plenty of prey stocked up inside the den.

Note: The backslash (/) indicates new dialogue or a text break in-game. This is a sample of possible dialogue. 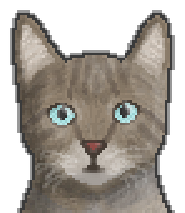 eh
Add a photo to this gallery

Retrieved from "https://cattails-game.fandom.com/wiki/Scout?oldid=35370"
Community content is available under CC-BY-SA unless otherwise noted.